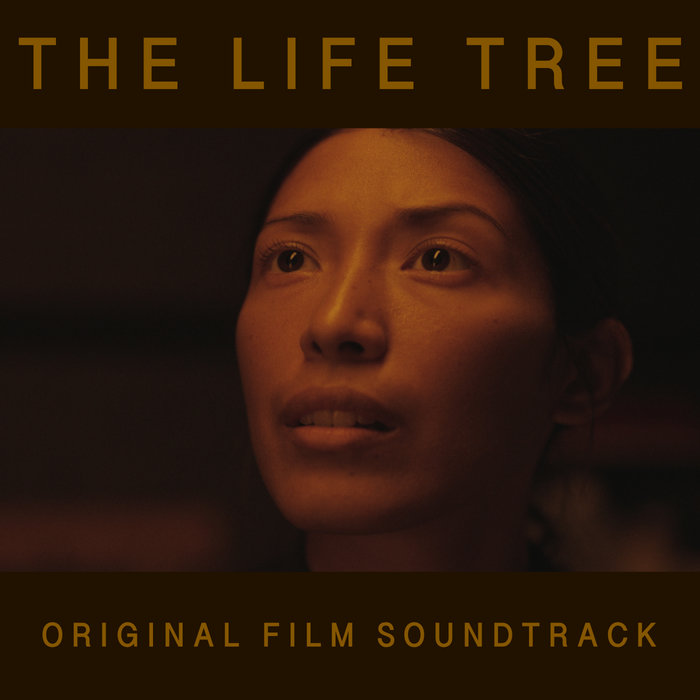 "I want you to act as if our house is on fire. Because it is."
- Greta Thunberg

'The Life Tree' is a magic realist film which tells the story of a Bolivian migrant's desperate hope to save her dying son in a future where climate change ravages the world. It was written and directed by Paul Frankl and is part of the larger UK film project 'The Uncertain Kingdom'.

The score, written for this film by Daniel Thomas Freeman, similarly confronts the difficulties of our stricken planet and tries to find hope, joy and life growing in the dark. Taking influence from Jóhann Jóhannsson, Swans, Paul Schütze, A.C. Marias and Bolivian folk music, it wraps the images in marimba, heavily processed pizzicato violin, ragged percussion and cavernous, diseased surges of Mellotron warped beyond recognition.

'The Life Tree' starts with the title track. Deep forest clusters of sound introduce this healing tree. Fractal patterns of harp trace the leaves and branches and battle the barely suppressed tectonic forces underneath. The subterranean forces emerge and erupt erratically in 'Sickness II', periods of relative calm stretched into despair by the unfathomable scale of the crisis. By 'Forlorn' the howling starts. The film ends with vast off-kilter heartbeat rhythms swinging in and out of focus.

Three further tracks imagine a possible future after the film, starting with the brief interlude of 'Gate', all harsh angles and instability. 'Prophecy (She Wants You To Panic)' references Greta Thunberg's famous comment to the Economic World Forum. Here is a world on fire; prophets crying out in the wilderness as a tipping point is reached and the end of world seems nigh.

Yet the final track 'Walking on the Wreck of the Old World' dares to imagine a life beyond our current troubles, a time when the crisis has resolved and we will learn new ways to live and love again.

"The moment of crisis has come. We can no longer prevaricate."
- David Attenborough

'The Life Tree' film, produced by Amy Binns and starring Díana Bermudez, is due for release online on 1st June 2020 as part of 'The Uncertain Kingdom' project. It will be available on BFI Player, iTunes, GooglePlay, Amazon Prime Video and Curzon Home Cinema. The planned April 2020 cinema release unfortunately had to be cancelled to due to the COVID-19 restrictions.

The writer / director Paul Frankl has had his short films screened at festivals around the world including Tribeca, Palm Springs, Rhode Island, Aesthetica and more. He is currently developing two feature films: 'Tchaikovsky', which is in development with the BFI Network, and 'Roxanne'. The short film version of 'Roxanne' has played at over 30 festivals and was selected as a Vimeo staff pick, getting over 100,000 views online. In 2018, he made two shorts: 'Gold Star', produced by Maria Tanjala, and 'Dungeons and Drag Queens', a documentary commission for VICE.

The producer Amy Binns started her career working in the art department on independent features such as Hyena and Keeping Rosy, before working with Parkville Pictures for the release of their Film London / BBC Films backed feature, 'Borrowed Time' (2013). Moving into production, Amy worked on studio features including 'Mission Impossible: Rogue Nation' and 'Doctor Strange'. Amy continued to collaborate with Parkville, producing the shorts 'Shift the Plane' (2017), written and directed by Callum Turner, and 'The Bris Of Michael Mosche Solomon' (2018), written and directed by Coral Amiga, as part of the company’s BFI Vision Award-supported slate.

The actor Díana Bermudez is a British actor of Indigenous American heritage who moved to London as a child from her native Colombia. She studied Drama at Richmond upon Thames college and then at the prestigious Royal Central School of Speech and Drama. TV work includes playing Itchy Ramone in 'Karen Carpenter: Goodbye to Love' (ITV) and she has worked on feature films such as 'The Death and Life of John F. Donovan', Oscar-winning director Danny Boyle's rom-com 'Yesterday', and Sylvester Stallone's 'Rambo 5: The Last Blood'.

Music written, performed, engineered, produced, edited, mixed and mastered between 2019 and 2020 in the United Kingdom by Daniel Thomas Freeman.

Special thanks and love to Val Freeman, Paul Frankl and Amy Binns. Love to family and friends.

Released BE008DTF by Blink in the Endless as unlimited digital editions.